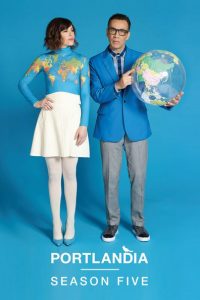 Portlandia is a satirical sketch comedy television series, set and filmed in Portland, Oregon; it stars Carrie Brownstein and former Saturday Night Live cast member Fred Armisen. The show is produced by Andrew Singer and Jonathan Krisel for Broadway Video Television and IFC Original Productions. It debuted on the Independent Film Channel on January 21, 2011. The series has been signed on for a fourth and fifth season.

The show shares its title with the sculpture of the same name that sits above the entrance of the Portland Building on Fifth Avenue in downtown Portland, which appears in the show’s title sequence. The show has won a Peabody Award.